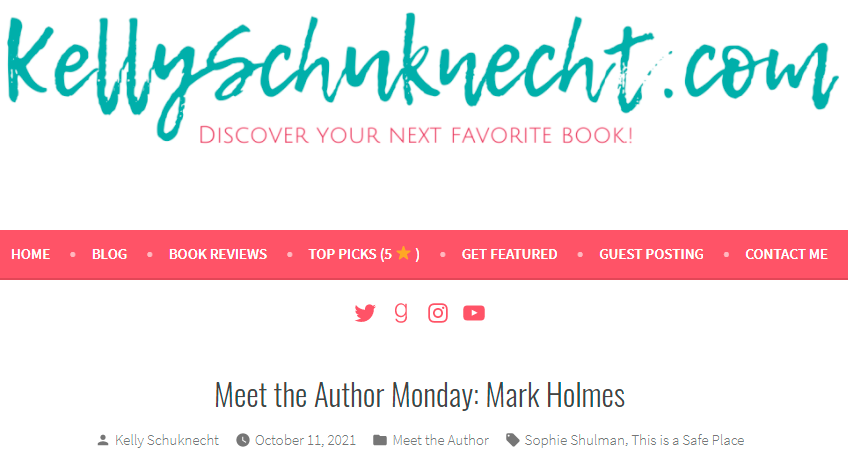 I was thrilled to be interviewed by Kelly Schuknecht for my new Quit Lit book in her Favourite Books blog feature, “Meet The Author Monday” on 11th October 2021 which you can read in full here:

1. What inspired you to start writing a Quit Lit book?

I spent years, daily, counting down the hours until ‘party o’clock’ and the terrible torment, trials and tribulations and torture that always followed in the inevitable aftermath. Sadness following happiness following sadness on “full” in the spin cycle of alcohol addiction left out to dry in the mornings like a bloated beached whale beside the receding tide. I started writing to show them there’s a way out and there always is.

2. What is the most surprising thing you discovered while writing your book(s)?

A lot of self-help Quit Lit books have got the most important fact about alcohol wrong. They all called alcohol a “depressant”, which you’ve probably learnt yourself, but it actually isn’t. If it was, why would so many people get a buzz or high from it? No, you’re not crazy, alcohol is a biphasic stimulant sedative. This means it acts as a stimulant, rewarding you with a pleasant sensation, before immediately following with a sedation effect, as surely as night follows day. Unfortunately, you can’t have one without the other. But if you ignore the “stimulant” effect you ignore the main reason why people drink. And seriously, every single “quit lit” book out there does. I feel like I’m trying to start a one-man revolution and shouting “the emperor has no clothes”!

3. What kind of research do you do, and how long do you spend researching before beginning a book?

There is so much misinformation on websites, I only work from primary academic sources, that is original scientific research papers or textbooks. But even then there is probably more research on alcohol than any other drug. Fortunately, I had a sharply tuned filter as a former alcoholic, and training as a Cognitive Behavioral Therapist, so I was able to take a therapeutic as well as scientific approach. In the end, I managed to narrow it down to just over 300 academic references, which is probably still too much (!) even for a 375-page book! But I wanted it to be a “Complete” guide to stop drinking alcohol, and give the reader all the tools and techniques they needed to quit drinking, and not leave anything important out which I felt was essential to their success. I was writing it for myself, really, for the alcoholic I was, in a way that would have made sense to me when I was drinking. And I knew I wouldn’t listen to anyone else’s opinion, alone, unless it was backed by chapter and verse so they could check the facts themselves.

4. How do you balance making demands on the reader with taking care of the reader?

You mean, what if there’s too much research? The challenge was trying to present the research in an interesting way, so I established the leitmotif of a Sherlock Holmes investigation into a “Suspect” who used a “Murder Weapon” to poison himself, and the facts came along for the ride.

5. What is your writing Kryptonite?

That would make an apt name for a drink! Kryptonite pretty much wiped out Superman, and alcohol pretty much wipes out the superman in you, too, if that’s not too contrived! (Sorry!) But I suppose alcohol is actually my “writing kryptonite” because it used to make me think up bizarre quotes and ideas, which at the time I thought were literary genius (!) but robbed me of any energy or enthusiasm to do anything with them.

6. Who is your favourite author and why?

I’m a huge fan of Charles Bukowski, and I will never understand how he produced under the influence, except to hazard a guess he probably didn’t. I mean, the drinking he did while writing probably only brought him up to most people’s “normal” level, so he wasn’t really under the influence at all. A bit like, I suspect, the alcoholic comedian, Doug Stanhope, who I also still adore and is still brilliantly funny on stage and in his “The Doug Stanhope Podcast.” What I thought would be really funny would be to ask him to write the Foreword to my book! Well, he did ask the addiction specialist TV doctor, Dr Drew, to write the foreword to his memoir, which he did. If you’re reading this, Doug, what about it? I’ve sent Brian Hannigan [Manager] an ARC for you!

Are we talking about Charles Bukowski or Doug Stanhope here? Or me? I really hope it’s not me. I did the whole ego self-important careerist my job-status-is-my-raison d’etre for twenty-years through the ranks of school leadership making a pretty decent living and travelling the world before finding sobriety and becoming an impoverished alcohol addiction therapist!

However, I feel more grounded and fulfilled doing what I do now than I ever did in education. Maybe I’m at that time in my life where it’s not all about the money, although fixing the boiler and hot water would be nice (!) (I’m like Petrocelli eternally trying to build his house), but instead doing what feels meaningful because you’re like over the half-way mark, by almost another half… hopefully! What was the question? Ego? I honestly think you lose your ego at a certain age in life – the pandemic, job crisis, mid-life crisis, kids, helped me lose mine – and if you don’t, you should have!

8. What, in your opinion, are the most important elements of good writing?

No ego! Honestly, honesty. That may be taken for read in a non-fiction book, but there is still such a thing as academic integrity, which isn’t always there. It would be so easy to write a ‘Stop Drinking Alcohol Book’ and use only research that favoured your argument. There is sometimes research for and against things that would make quitting the least likely option after reading it. And when I quote something, the quote has to be true to the academic conclusion otherwise it’s a misquote. And if I know more recent research evidence disproves earlier evidence then I don’t use the earlier evidence. But all of these things are not necessarily apparent on the surface, but hopefully the bedrock at the core that holds the book together and will establish its place in time, especially if Doug Stanhope doesn’t write the foreword!

9.  Do you hide any secrets in your books that only a few people will find?

I came across research that proved sex was better on alcohol. Now I had a choice. Do you ignore it? You know that 9 out of 10 readers have suddenly decided quitting alcohol isn’t such a great idea anymore if you use it. Can you hide it somehow? That’s a pretty big secret to hide. You need to be honest. So, I quoted the research. Now I’m telling you that I personally believe sober sex is better but I still quoted the evidence, because if the reader doesn’t trust me to do that, and let them make their own minds up, then they couldn’t trust anything in the book. But I made sure to back up my personal belief and include research on why sober sex is better, too!