#4 What do you miss most since you stopped drinking? 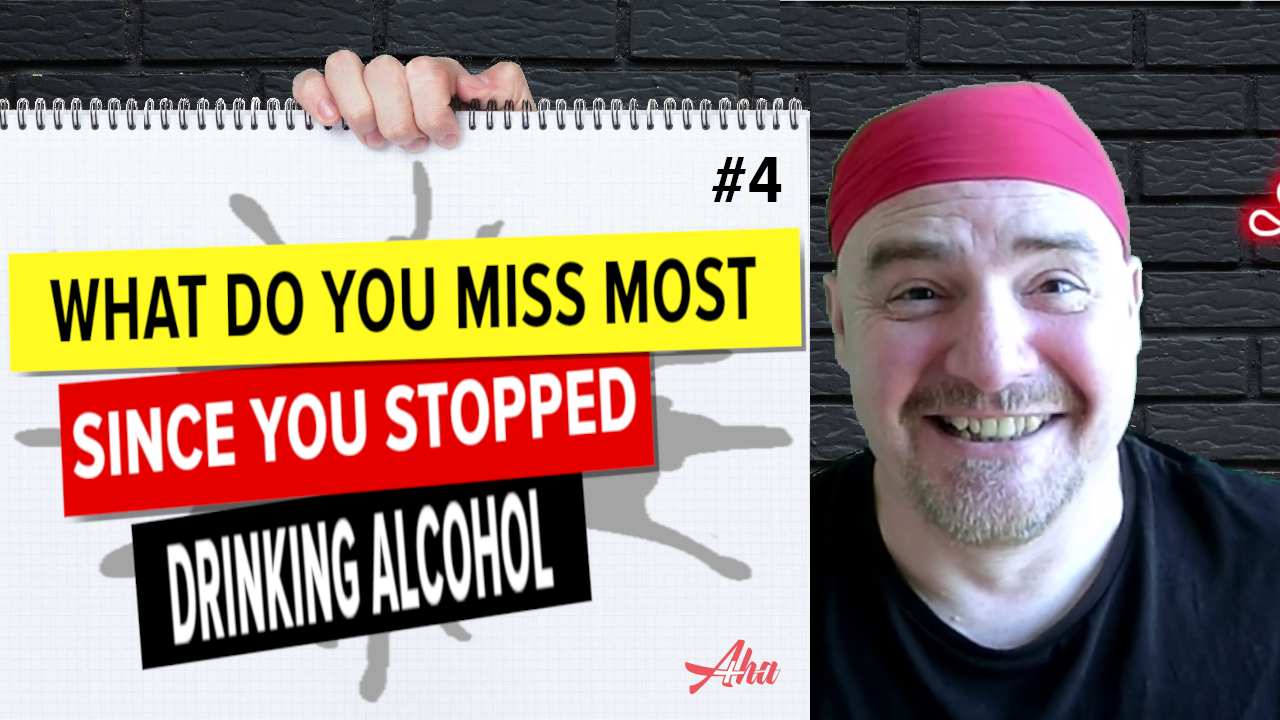 When you quit drinking you will gain your sobriety but there may also be things you miss. Mark Holmes, Alcohol Quit Guru, honestly explores what he misses most and the answers are the least you’d expect.

Morning, and welcome to the Crazy Sobriety Vlog. And today’s question is, What do you miss most since you stopped drinking alcohol?

Okay, well, I’ve been thinking about this one. And you remember when you were a kid, and you used to play ‘Cowboys and Indians’? I used to run around the back of houses with a stick pretend-gun ch…ch…ch!!! (Making gun sound effect) You know, doing all that stuff. I’m actually a very peaceful, grown-up adult now. But, when you’re a kid, you do these things, and it seems really real.

And there’s no consequences.

So nobody gets hurt.

And I think the analogy is apt.

You hurt people. But you have this strong vein of self-justification and adopting the high moral ground, and the principle. Everything was always, “Oh, the principle, it’s the principle of the matter!”

So I’m just talking about the “Us and Them” thinking and making judgments about others. And this is something when I was training to be a counsellor that I learnt from Carl Rogers, who is the greatest proponent of patient-centred therapy, where the patient is equally an expert.

It’s more important for the patient to define why they need to give up alcohol, why it’s damaging their lives because I don’t know. As the counsellor, what do I know? I’m just facilitating that process of self-discovery and self-awareness by asking, hopefully helpful and probing questions, but without any judgement at all. And that is so important in counselling, and I think in life generally [Not judging.]

It’s funny, isn’t it, that we’re taught through different levels of education; I got my master’s degree; I’ve got a level seven, that’s apparently what a master’s degree is, “level seven”. But what does that mean? I’m a really good differentiator; I can differentiate really well. I can evaluate. I can discriminate. I can categorise. But is that intelligent? You see, this is what we’re trained to do. And even if it is intelligent, is it wise?

Yeah, the point is we shouldn’t be [differentiating; discriminating; categorising] judging others.

And having a kind of ‘absolutist’ stance isn’t really a good way of living. And I think that’s the problem when you’re drinking – when I was drinking – that you have a kind of distorted view of reality, oversimplified, which can cause harm.

And you lose all your control over your inhibitions when you drink alcohol.

So you’ll say things (laughs). And you’ll feel quite proud of saying them. But nobody [else] would say them. But because nobody would say them, you think that’s even better! That you’re even more special! (Laughs again.)

I’m laughing because that’s what I did! And that’s how self-deluded I was.

I did this interview the other week on Zoom about the book, Holmes’s Complete Guide To Stop Drinking Alcohol, and in that interview I said, “I think I’ve got brain damage.”

The reason I said that was because there’s some research that shows that there can be some damage to neural pathways if you drink for a long time, that’s in the book.

[Alcohol interacts with the brain receptors, interfering with the communication between nerve cells, and suppressing excitatory nerve pathway activity. Neuro-cognitive deficits, neuronal injury, and neurodegeneration are well documented in alcoholics, yet the underlying mechanisms remain elusive.]

And you can see the evidence there. But if you just say, “I’ve got brain damage…” (Laughs again.) Sorry. It does sound really harsh. When I say “brain damage”, I mean maybe slight damage to neural pathways. And that could relate to inhibitory control [and memory]. That means how much I can control what I’m saying and what I’m thinking (… as that interview clearly demonstrates!) But also, importantly, emotional regulation.

And I have learnt so much being sober and writing and researching for the book. But I do still struggle. I mean that just because I found out what I think is quite a lot about alcohol, it [the damage] still affects me today.

And I still have issues sometimes trying to control my emotions and emotional regulation.

So, what do I miss most since I stopped drinking?

I liked not feeling responsible,  I liked being a kid, and I suppose I miss that a little bit.

I’ll have another beer, and if it gets really bad, I’ll have two.

And that kind of carefree way, that’s quite “good” [feeling].

And so even though I say I’m recovered… I don’t believe in this recovery-constant “I’m always an alcoholic.”

I think that’s, – Oh my God – That’s like an anchor around your neck. Forget that! You can be cured of alcoholism, you can move on and you can leave it behind you. You don’t have to spend the rest of your life counting the days [since your last drink].

I hate that, by the way, don’t do that. Don’t do that! I call it “dead dating”. You know the story about Caitlyn Jenner. Someone referred to her former male name, and that’s called, “Dead Naming”. Well, I think referring to my last drink, when I had it is, “Dead dating”. And I don’t understand the point of it. I don’t want to count how many days, weeks, months, years, I don’t care, that was in my past.

And so what do I miss the most [about drinking alcohol?]

I don’t really miss anything except I miss, maybe, a little part of neural plasticity. And I am missing, perhaps, a little bit of emotional regulation sometimes. And I struggle to deal with that. And that I believe is a consequence of drinking alcohol.

But I’m aware of it.

And I think that’s got to count for something.