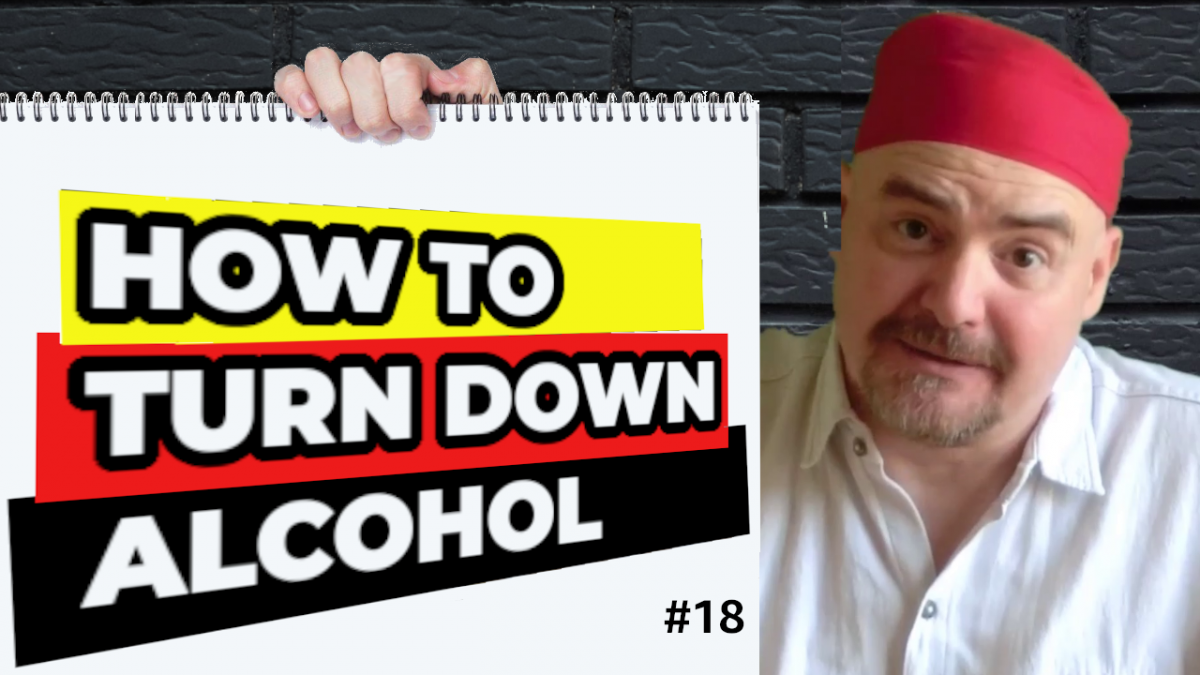 Drinking is so accepted it is hard not to accept a drink so Mark Holmes, Alcohol Quit Guru, explains how to turn down alcohol the easy way.

Good morning, and welcome to the Crazy Sobriety Vlog and today’s question is, How do you refuse a drink after you stop drinking?

It should be quite straightforward shouldn’t it, to say, “No thank you, I don’t want a drink.” But it’s surprising when you’re in social situations that you can get yourself into that trap in a way. Because it’s so common in our culture to accept drinking, that sometimes we can feel it’s rude not to accept a drink.

There’s this expectation that other people have on you that because I’m buying you a drink, I’m helping you in some way, not poisoning you. And the way they look at you, “Would you like a drink? Oh, why not? Why don’t you want a drink?”

It’s like they think you’re crazy to refuse this extraordinary gift that they are bestowing upon you. When, in fact, it’s quite the opposite; They’re trying to poison you.

So how do you refuse that drink? How do you do it politely? I think the best way is to be very firm and clear.

“Oh, go on, have a drink. You know, it’s her birthday. Come on, everyone’s having a drink.”

DON’T EXPLAIN OR JUSTIFY YOURSELF

It’s not an AA meeting. I don’t have to share my history with the whole world, the whole pub, with all the friends. It’s got nothing to do with them really, has it?

They’re expecting a lot from their little gift of ‘kindness’, aren’t they, if they’re expecting me to sort of bend over backwards to justify why I don’t want their gift.

Now I’d be tempted to say, “Excuse me,” if they insist, “Excuse me? I just want a drink of orange juice, please. That’s what I feel like.”

You don’t have to feel bad about that, or shy, or that you’ve done something wrong, or guilty by just wanting a soft drink. That would be ridiculous!

I’ve heard it compared to someone offering you heroin.

“Do you want some heroin?”

In my book, “Holmes’s Complete Guide To Stop Drinking Alcohol” there’s a survey that’s done on university students because they’re under an awful lot of peer pressure to drink alcohol. And you read this in the book about the answers that some people gave, and what were the most effective responses.

One girl came up with a great response, which was something like, “I don’t drink. I have never drunk. And I don’t see the point in drinking.” Now that tells you where that lady stands straight away. Like it, or leave it, that’s her position. And I suppose in a way, that’s a good place to be.

SHOULD I STAY OR SHOULD I GO?

If you’re not feeling comfortable with the person that you’re with, or they can’t accept your preference for a soft drink, then you’ve got to question whether you’re in the right place. Do you leave the environment altogether, or do you just move away from that person? Because it’s one or the other, isn’t it?

If they can’t accept that, and they want to insist that you, “Come on, come on, I remember you used to be the life and soul of the party!”

If they’re going to do that, it’s not really fun. It’s not pleasurable for me to be in that company. And sometimes you may have to make that decision and say, “Actually, I’m really exhausted, I’ll catch up with you later.”

That’s not being rude, that’s if they are being rude themselves. That’s only if they can’t accept the fact that you want an orange juice, for goodness sake.

So stand firm, be clear. And if they can’t accept that, can you accept them or that environment?