#7 Why did I start drinking again after I quit? 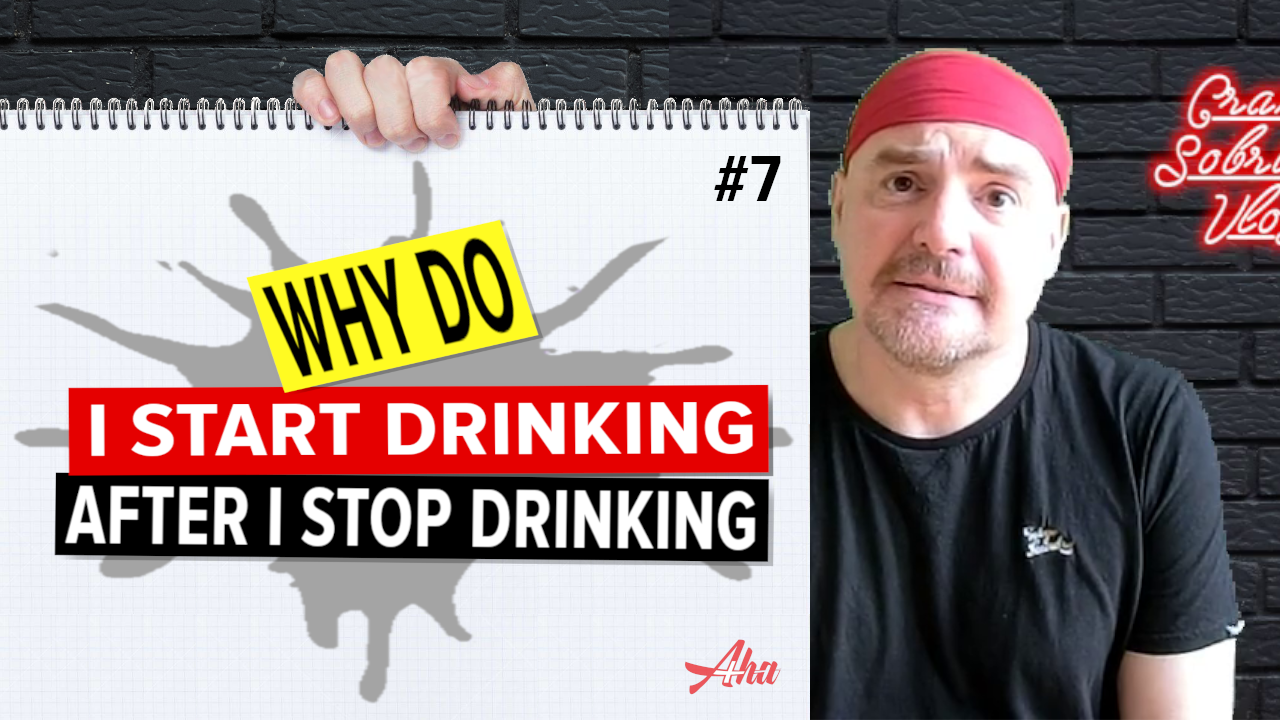 Mark Holmes, Alcohol Quit Guru, explores the causes of relapse in this frank and disarmingly honest vlog describing his repeated failures to quit and personal journey to permanent sobriety.

Morning and welcome to the Crazy Sobriety Vlog. Today we’re asking, Why do I start drinking after I stopped drinking?

Picture the scene, you’re in a beautiful bar in Bremen in Germany, and I’m playing the white grand piano in the corner. There’s a Christmas tree with lights twinkling, and the world is peaceful and bright. And a little girl wanders over, maybe 10 years old, with a white dress and golden blonde hair, looking like a little angel carrying a glass of champagne. And she says, “here you go.”

And I look at her with shock! A gasp. Horror!!!

Why? Because I’ve just spent the whole month walking the length and the breadth of the Bremen river so that I don’t have another drink of alcohol.

This must be a message from God.

I remember actually memorising the first chapter of the New Testament, “Mark”, so that I didn’t drink.

I think I was actually doing both:  I think I was walking miles every night, and then coming back to memorise the Bible so that I didn’t drink.

And there’s this little angel. And I just took the glass and I said, “Happy Christmas.”

Now, I don’t suspect many of you will find yourselves playing a white grand piano in the corner of a luxury hotel in Bremen in Germany, affronted by an angelic looking girl in a white dress with blond hair carrying a glass of champagne. So that might not be your reason for relapsing.  I think the chances of that relapse are quite low for most people! But, it still begs the question, why do we relapse?

Why do we start drinking again, after we said, “No! No way! I’m not gonna drink again.” And I think there are several reasons.

One, we have to think about what was the motivation? And the motivation, as I’ve said in my book, “Holmes’s Complete Guide To Stop Drinking Alcohol” is usually either a “reward” [or “relief”], so it’s to celebrate something. In this case, it was celebrating Christmas, but it could be any celebration: a wedding anniversary, a birthday or winning the lottery.

It’s either a reward or it’s for relief: to cope with some kind of negative emotional state or something bad that’s happened.

I don’t think there’s any other choice. I think it’s either a reward or relief. And if you look in my book, you’ll see that there’s research that backs that up. But in these videos, I’m not going to be quoting research. I’ve got 300 quotes in my book, which I think is enough for anyone!

So you have to think it’s not a case of, “Oh no, it just happened! I just relapsed. I don’t know why.” No, you wanted something. You wanted some outcome, some consequence from alcohol, from that drug.

It could be, like I said, to get a high, to feel good, because it does give you a reward. It’s a biphasic stimulant sedative. Alcohol is not a depressant, forget what the other “Quit lit” books say about that.

No, so it could be you want that pleasurable hit, but there’s many ways of getting pleasure.

In fact, there’s so many. I like motorbikes, I like motocross, and I enjoy reading books, I enjoy movies, and I can’t do any of those things drinking alcohol. [Actually] I could, I suppose, but it’s less entertaining, alcohol detracts from them.

If you’re trying to read a book when your drunk, “I don’t really get this…” It doesn’t make much sense because I can’t see the end of the line. Or if you’re trying to ride a motorbike when you’ve had a few that is a bit painful if you ever crash!

And so I think alcohol reduces pleasure.

So if you’re looking for [reward or] pleasure from drinking alcohol, it could be that, but there’s many other better ways.

And if you’re looking for “relief”, well, you know, alcohol is never, ever going to solve any problem, and there’s a lot of stuff in the book about that.

You know it yourself, though. You know yourself that a drink is not going to relieve.

It might relieve your symptoms temporarily. So if, “Oh no, goodness me, this just happened,” you might get some relief from that alcohol, but the consequence of the alcohol will make stress much worse. And so it’s going to exaggerate the problem. And it will eventually make the problem worse because you won’t have addressed the problem, you’re sticking your head in the sand.

And that’s one thing you learn from being sober is you have to face up to problems. Look at them deeply. And that’s, like I said, in the book as well.

So, reasons for relapse: reward or relief.

Don’t be too hard on yourself if you do relapse, and you’re watching this video because you’re just like, “Oh God, I can’t believe it…”

If you’re going to be tempted to relapse for any reason, or you do relapse, and you have one drink, just get away. The first thing is get away, doesn’t matter if you’ve had one or half, it doesn’t matter, just get out of there, leave the bar, leave the situation, walk out the front door, whatever, doesn’t matter.

Next, then you can start reflecting on it.

There’s different types of relapsing, it could be a slip, which is not a fall. A fall means you fall off the waggon, you’re going to be “off”, you’re not going to get back on the wagon because you’ve fallen off it. And it might be weeks, months, years before something bad enough happens that you say I’m going to quit, “definitely, definitely next time!”

A slip could be just temporary, and you can learn from that. And then you can get back on the wagon. So it’s not as harmful.

The other thing that I found in my research is that there is a pattern of relapse. So you can actually plot on a graph when a relapse is likely following cessation of alcohol. And you can see that there’s a pattern, tends to be like after three months and after a year. So if you’ve followed that pattern, don’t feel bad about it.

In fact, don’t feel bad about any relapse. I’ve got a real issue with the AA.

The AA are obsessed with counting. I don’t know, maybe they’re all accountants! Because how many days has it been, how many months has it been, how many decades has it been? How many since I had a last drink. I mean, I hate that. I call that “dead dating”. They talk about Caitlyn Jenner and, “dead naming”. Don’t mention her former male name. I think don’t mention the former dates you were drinking. I just don’t think you should do it. I think it’s rude. Am I better than you because I’ve got 10 years and you’ve got one year, or you’ve got five minutes, and I’ve got five hours, or… it’s ridiculous!

So don’t feel bad if you relapse, and you’re going, “Oh goodness me, now I’ve lost my 26 month count, and I’m back to zero! Back to square one!” Don’t think that! It’s all wrong thinking, right? It’s just wrong thinking.

You should be your own best friend and not your own harshest critic.

I think that you need to have self-compassion. And this is a very important part of the Cognitive Behavioural Therapy basis of my book, developing that self-compassion and kindness towards yourself. So don’t be too hard [on yourself]. Life’s a journey, not a destination.

And sober life is much more fun, and you’re a lot happier, than otherwise.