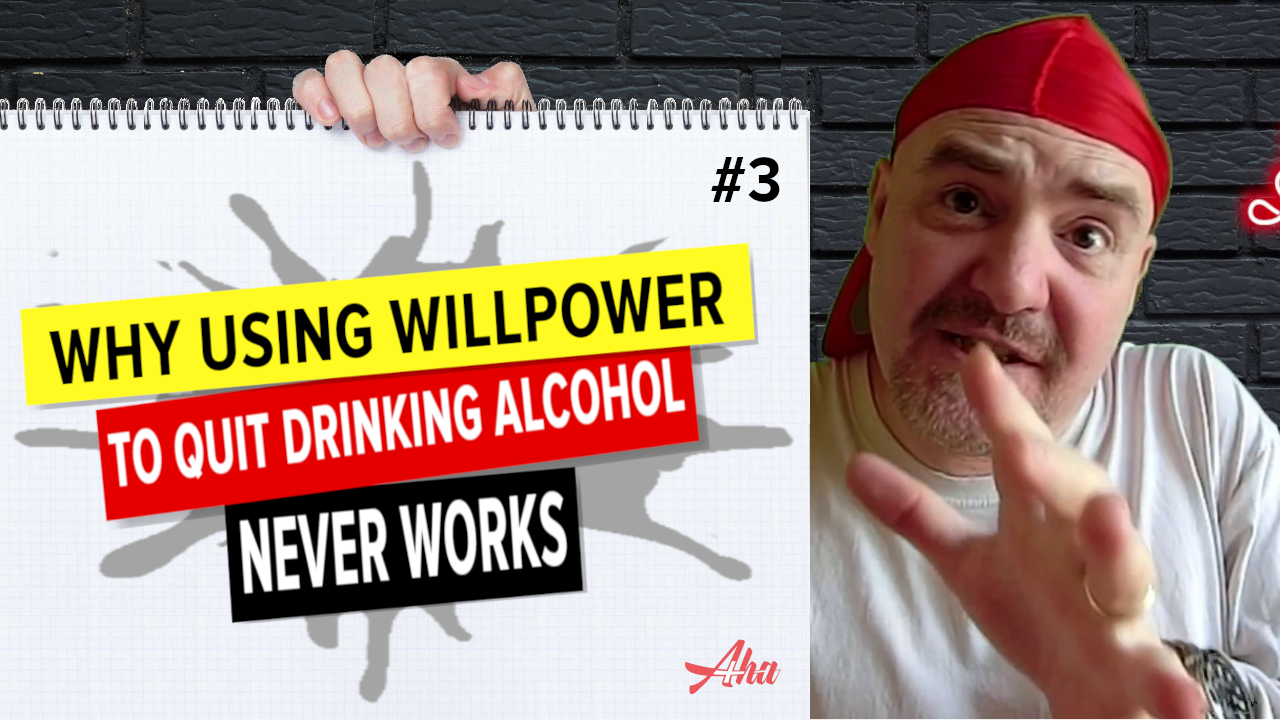 Thank you for joining me. Yesterday we looked at different ways, what are the best ways to quit drinking alcohol. And the first one I suggested was willpower. Now for some people willpower is a very effective means to stop drinking alcohol. It could be that they’re an occasional drinker and they’re not routinely drinking alcohol for different reasons, like celebrating the end of the week at work, or using it to to relieve stress, or for one of a myriad variety of reasons.

But for some people, they may find it more challenging to stop drinking alcohol, and when there’s events like dry October or dry January, they may struggle during those months.

Now also I think about an analogy: I love motorhomes. My dream one day is to buy a motorhome with a garage in the back so I can put my motocross bike in it. I’m a bit of a biker, if you’ve missed the clues, and when I think about a motorhome, looking at pictures of motorhomes, like motorhome porn, isn’t gonna get me a motorhome. And in the same way, thinking about drinking, or not drinking, isn’t going to stop me drinking. It’s what I’m doing outside of that goal to achieve that goal, if that makes sense. So If I want to stop drinking, then using willpower and saying, “I definitely won’t have a drink now, I definitely will not drink,” is not necessarily going to work because you should be doing things to not be thinking really about drinking.

Using distraction, using different activities, changing your routines, avoiding the occasions whereby you would normally engage in drink [avoidance strategies rather than willpower within the same environments where you drank alcohol]. So there’s all those different sorts of things you could be doing rather than just focusing on pure willpower, “I will not drink, I will not drink,” which is not very effective.

There was a great theory by Daniel Wegner, and I’m looking in my book now who wrote Ironic Process Theory. And he said,

“This theory posits that processes that undermine the intentional control of mental states are inherent in the very exercise of such control.”

That’s Daniel Wegner, in a fantastic book called “Holmes’s Complete Guide To Stop Drinking Alcohol,” by me. So it’s a lot about controlling our thoughts.

And then we just say to ourselves, okay, we’re not going to drink. How can that happen? How can it work, it’s impossible to work. If you still think, Oh, well, I can get a buzz out of alcohol, I really enjoy it when when I go out with my mates, and if you’re still in the mindset of how great alcohol is, and then you’re going to rely on using willpower, you are setting setting yourself up for torture. And there’s no other way because these views, your way of thinking is so embedded.

So if you’re not going to change the way of thinking and deal with that, then you’re just going to torture yourself by saying, I’m going to use the willpower method. And this is why many people, me included, go on this cycle of repeatedly quitting. And it doesn’t make sense. Why am I trying to quit again? Why am I trying to quit, again? Do I have a drinking problem?

And possibly that is even more ironic than Daniel Wegner’s Ironic Process Theory!

I mean, it’s the old classic, isn’t it? So, willpower?

Once drinking moves from a kind of occasional or celebratory, once in a while, once in a blue moon occasion to a more habitual use and, may I use the word “purposeful” use, so that you’re using alcohol for a particular purpose, then you will potentially struggle to use willpower to quit drinking alcohol.

← Go to #2 What is the best way to stop drinking alcohol? Go to Am I alcoholic self test →