#2 What is the best way to stop drinking alcohol? 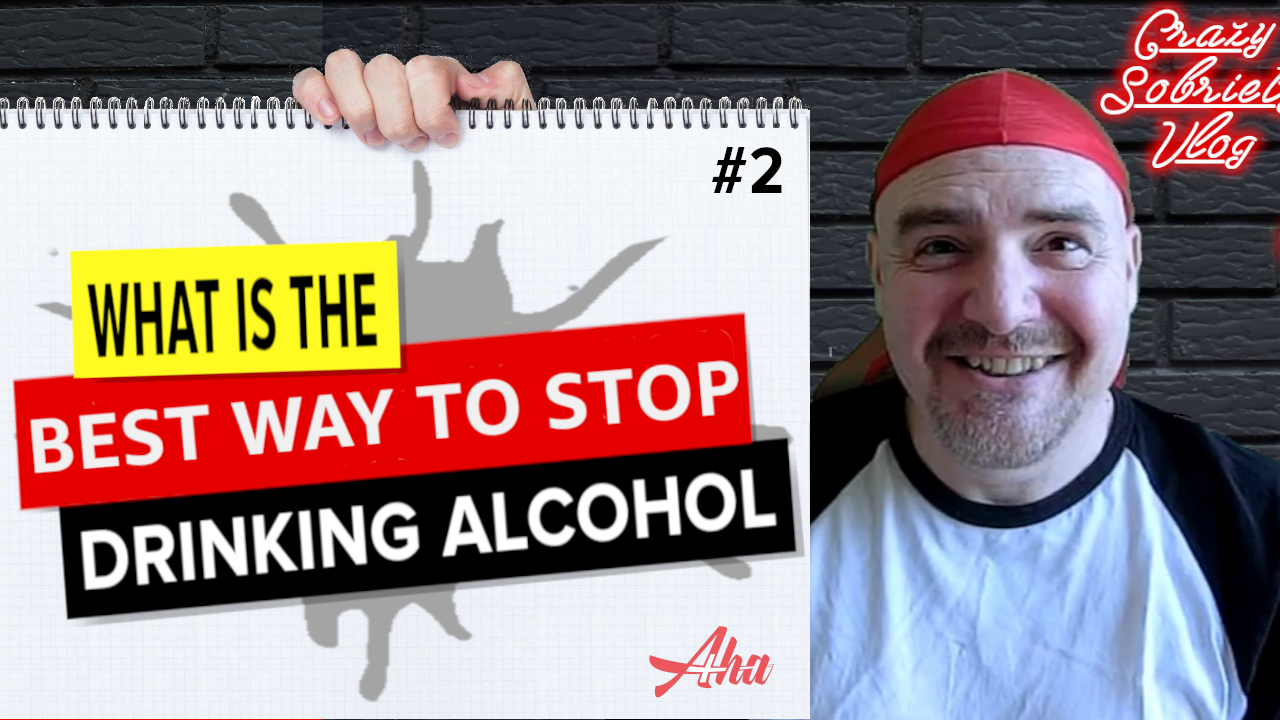 Good morning and welcome to the Crazy Sobriety Vlog and today’s question is What is the best way to stop drinking alcohol?

Okay, first off, we’ve got willpower.  So I’ve walked for miles, and at the end of that,  sometimes I literally came back with tears rolling down my face because it was so hard for me to use the willpower method.

But remember, most of these alcoholics are very successful. So they’ve got a lot of willpower, because they carry an addiction and a full-time job, and often a very successful career. So willpower can be very effective for some people.

Secondly, bibliotherapy. You’ve got to be a bit careful with bibliotherapy because some of this ‘quit lit’, they call it don’t they, genre is based on little evidence. Some of the books don’t even have any references. Or there might be a reference to “my best mate said,” but not an academic reference. So you really need to use a book that’s actually willing to state where they got their facts from, from my point of view, having done quite a lot of research for my book, I was amazed [they didn’t research]. So yeah, what would I recommend? David Nutt’s book is very good, “Drink?” He’s a professor and former government adviser to the British government, so all his books are very well sourced and referenced and very reliable, so you can trust them.

Although he does own and run a wine bar, I believe, with his daughter in London. So, he’s not exactly averse to drink, shall we say?

Another very good book is David Fring’s, “The handbook of alcohol use” although he didn’t write it all himself. In fact, he asked a few of his friends. Each chapter is written by a specialist so it’s highly researched based, but fascinating. The selection of research in that book is truly enlightening. And it’s all about selection. You know, I’ve got over three hundred references, academic references in my book, and the quality of those is how relevant they are as a former high functioning alco… alcoholic – you see I can’t even say it! As a former high functioning alcoholic myself – I was able to kind of filter what I thought was relevant and useful. And even if I disagreed [with the research], I’d include stuff, there was stuff I included saying, “sex is better on alcohol,” which I don’t think it is. But I thought there is evidence there that it is. And so I gave both sides. So that’s just an example. I want to give you the research so that you can make your own mind up and that’s in my book, Holmes’s Complete Guide To Stop Drinking Alcohol.

Number three method: You can get Apps for your mobile phone. One’s called “I Am sober“. Another one is called  “Sober Tool“, that’s by a Harvard educated academic. And there’s another one called “I Am,” and that human element is so important for motivation.

This is also why I don’t want to be too hard on some of those popular ‘quit lit’ books because they’re coming from, I’m sure, a good place, and they’re trying to help and so what if technically they’re a little bit astray sometimes on what alcohol is. There’s an argument that if it helps you quit, is it so bad? I don’t want to be kind of too high and Almighty and say that only the academic approach is valid and best. You want to try and balance that with the motivational side and the emotional side because we’re all sort of largely kind of led by emotions and feelings, aren’t we? Not just by logic. So yeah, that’s called the “I am” app.

Next you could listen to Sobriety Podcasts. There’s one that I like, which I’m surprised I like, Russell Brand’s, “Under the skin.” And I didn’t used to get Russell Brand way back in the days. I just didn’t get him. I just didn’t get it. I thought he was a bit, dare I say, full of himself. I mean he’s a very handsome man, I suppose, I suspect I suppose! And very charming. And a lot of people find him hysterically funny, but I just didn’t get him. But his podcast is fantastic! Unfortunately, I think you’ve got to subscribe to it. And I think there’s a payment wall. But there are some episodes on YouTube free. And he interviews some really interesting people like Meister Eckhart Tolle, who you may know from “The Power of Now“. If you haven’t read it, it’s a number one book!

Another podcast? Well my favourite podcast I shouldn’t recommend because it’s the antithesis of a sobriety podcast, but I’m going to do so anyway, that’s Doug Stanhope’s Podcast. The Doug Stanhope Podcast is hysterical. He’s an alcoholic, unashamedly so, but I can’t help but say I still find him hysterically funny, even in my sober life! So why can’t I recommend him? Yeah, why not!

There’s another fantastic secular podcast by John Sheldon, called the “Beyond Belief Sobriety Podcast.” Now, I know it’s brilliant, because I was a guest on that show. And he’s a really nice guy, John, he’s got a really genuine way with people, he actually listens. He’s not trying to be the big “I am.” I was thinking then of Russell Brand. But, in fact, Russell Brand is not like that so much. And Russell Brand also did by the way, a very good interview with David Lynch, which is fantastic! And that is, I believe, on YouTube, check it out! And you can find my interview on there [Beyond Belief Sobriety Podcast], as well. Now, I haven’t seen it yet, so I don’t know if I should be recommending it. But, yeah, I’m sure it’s gonna be fine.

You could join a Facebook Group on Social media. Most of them are set up by authors [laughs] I suspect, surreptitiously trying to promote their books, like me! (He quickly adds for full transparency.) But there are exceptions. There’s one called the “Online Soberish Book Club” group. That’s Susie Darren’s group, and she’s great! And there’s also a very, very excellent one called, “How to stop drinking alcohol.” Yes, that’s a public group. Susie’s one is private. But “How to stop drinking alcohol” is public. I know that because I’m admin! So you might hear my book mentioned once or twice, but in between that, I do try and offer advice and try and help people.

And the last one I’m going to recommend, as one of the best ways to stop drinking alcohol, is Counselling. Cognitive Behavioural Therapy based counsellors (CBT). If they say CBT I mean, you’ll be alright, because it’s short term,  twelve weeks, and always very objective. We know what we want to achieve with this change in behaviour and that’s where we’re heading. Whereas you could look [at other counselling methods] there’s so many different forms, but all of these approaches are much broader, not to denigrate them in any way, but they’re much broader and they can take many years.

If your goal is to stop drinking alcohol, CBT has been proven to work for millions and that’s the way that worked for me so that’s why I recommend that.

Also look for addiction specialist counsellors, the one I recommend is Addiction Professionals. This is for the UK, obviously. And if you do addiction professionals.org.uk/practitioner.directory, you’ll get a whole list of all the counsellors, and their contact details, their mobile or their email.

In America, the most popular online therapy would probably be “better help“. Yeah, the only thing there I’d say with the last option I’m mentioning is cost. It [betterhelp] just can be expensive.

And last but not least, I almost forgot is you could join the Complete 12 week CBT Alcohol Cessation Course at the Addiction Help Agency online one-on-one. And the address for that is addictionhelp.agency. And that works out, I think they’re quite affordable, at 600 pounds for 12 weeks. So it’s about 50 pounds a week with a 28-day money-back guarantee with them. You can meet your counsellor in the first session for free.

So, out of all of those options, what is the best way to stop drinking alcohol? To be honest, there isn’t really one best way, whatever way that works for you is the best.